How do Noyafa cable trackers stack up against Cen-Tech cable trackers? The short answer is, that they’re both great tracking devices, but they have their unique advantages and disadvantages that you should consider when deciding which one to buy. Let’s take a closer look at what makes these two options differ from each other, so you can choose the best cable tracker for your needs.


Both Noyafa and Cen-Tech are in business to provide their customers with useful products that help organize, protect, and keep your cables safe from damage. If you’re looking for a product that will help with cable management, either brand would be a great choice—but there are differences between them that might make one more appealing than another depending on your preferences.


To help you pick which brand is best for you, we’ve compiled a list of facts about each company here to give you a better sense of what they have to offer; hopefully, our information can guide you towards making an informed decision.


Chinese manufacturer Noyafa is one of the best cable testers in the country. While their top device can get a little expensive, it’s still cheaper than many American cable testers and includes high-quality features like a simple operation, two different fault modes, built-in battery status indicators, and more.


If you're searching for a new device but don't want to break the bank, Noyafa accessories can be purchased on Amazon. These cables are durable and well constructed—and they use the same components as their full-size counterparts. A lot of customers even say that after using these cables for over a year they've noticed no drop in quality or functionality.


For cable manufacturers who don't have much space available but need a handheld tester, a desktop version might not fit into your plans. If that's you, Noyafa also makes some of their devices in miniature form.


Despite having a range of benefits, cable testers are often expensive products that can put a dent in the wallets of many small to medium enterprises (SMEs). This is particularly true for SMEs based in developing countries where the cost of testing an entire network can take up an enormous amount of time and resources, which makes it difficult for them to invest in cable testing devices for their office networks.


However, Noyafa has been working hard on creating a cable tester that is affordable and easy to use, giving SMEs access to quality testing tools at affordable prices.


These tiny testers are ideal for tight spaces and they're often more affordable than their full-size counterparts—but they do lack some of Noyafa's features like battery status indicators and fault modes. The smaller devices are still very effective at testing cables though, so if you're looking for something simple to use then these products will work well for you.


Among all cable testers, Cen Tech is a very expensive cable tester manufacturer whose prices start from $400 to $2000. This expensive price makes it very difficult for a small business owner to acquire these products. This is one of the major reasons why people prefer Noyafa products which are cheaper in price and work with the same effect as that of cen tech company cables trackers.


The prices may be high but if you compare Cen-Tech products with other brands’ test tools, you will find that there are hardly any differences between them when you come to know about their performance features.


These companies are a little more expensive than some of their competitors, but with that higher price comes versatility and a generally easier-to-use product. The cable testers sold by Cen Tech, in particular, allow you to test different items such as radio transmitters and receivers, wires, and power lines while their battery tester is water-resistant, meaning it can be used on larger projects sites without much hassle.


This can be an important consideration when you need to do repairs on your home or something else that requires being outside. While we prefer Noyafa over Cen Tech overall, there are times when these products might make sense—for example, if you plan on using them frequently or want something very durable.


If you want something basic at a good price point, however, look elsewhere. If money isn't an issue then we'd suggest going with Cen Tech or NoYafa because they will save time testing your cables and come with extra features like circuit checkers built-in so you know exactly what kind of problem you're dealing with with with right away.


Sometimes though, how much money you spend isn't really all that important because having poor quality equipment won't let you get the job done quickly anyway. If the budget is tight though then Noyafa has plenty to offer.


While they may seem very similar at first glance, there are a few key differences that you need to consider when purchasing one of these cable trackers. We’ll look at how each one works, their pros and cons, and compare features to help you figure out which one is right for you.


They’re different products, but have very similar purposes; finding missing cables in a pinch can save time and money and keep rooms looking tidy all at once. While it isn’t difficult to find an unplugged cable when you need to, sometimes things fall behind furniture or get shoved into odd places around the house; knowing where everything is can save hours of frustration later on down the line. 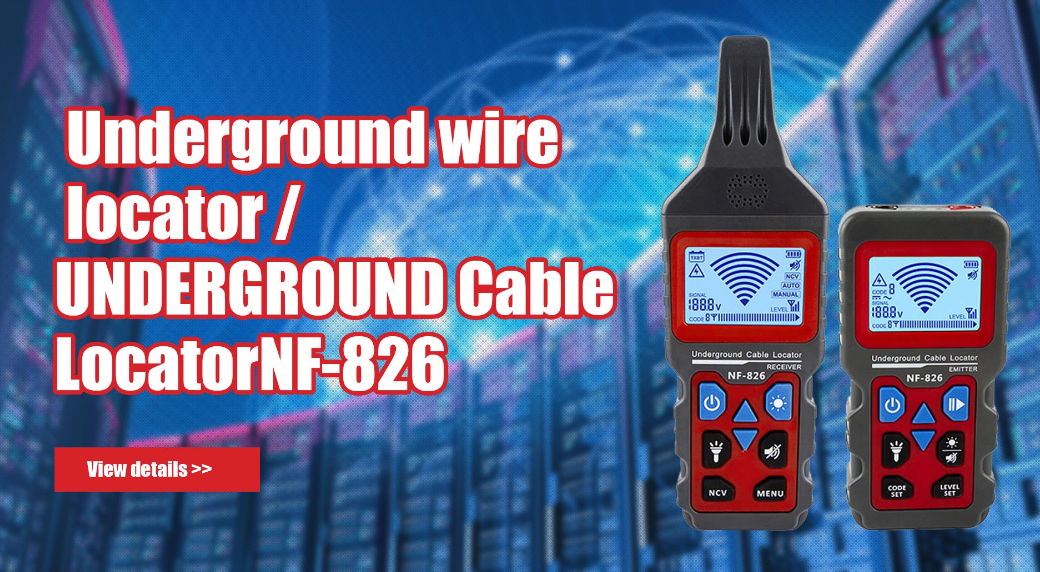 Although you can find cheaper cable trackers on Amazon and eBay, they might not be as reliable as Noyafa NF-826. This particular tracker has a three-meter range, which means it can track cables over long distances of up to 32 feet (10 meters). It’s also very affordable compared to many other cable trackers that offer similar functionalities (ex: NF-828).


Because of these two factors combined, Noyafa NF-826 is your best choice if you want an affordable cable tracker that has strong functionalities and is easy to use. Also, it’s important to note that while Noyafa NF-826 is quite effective in tracking down lost wires and cords, it won’t work well with USB flash drives or external hard drives. If you have any of those devices laying around at home or at work, we recommend looking for another type of cable tracker.


The NF-826 from Noyafa is a cost-effective tracking device with very long battery life, plus it has good features for both home and commercial use. But before we get into all that, let’s see why you might want to consider an RF tracker in general.


Many vehicles have parts that need to be tracked—especially fleet cars or mobile assets used for deliveries or other such activities. In fact, more than half of people surveyed said they had at least one item of business equipment that they needed to keep track of via GPS—and 41 percent said they used a GPS tracker as part of their inventory management strategy.


One of its biggest selling points is its price tag. While many trackers are costly, the NF-826 isn’t too expensive, especially when compared to similar devices on the market. You can buy it for less than $90, which makes it much cheaper than most of its competitors. Plus, since it doesn’t require a subscription fee (unlike some other trackers), you don’t have to worry about ongoing costs either.


And what about features? Well, there are quite a few things going for it here. First off, you get up to 5 years of battery life, so you won’t have to change your batteries every few months like with some other trackers out there.


And if you do run out of juice while using it, it comes with a USB cable so that you can charge it up whenever necessary—so no hunting around for spare batteries when your power dies. You also get around 2 years' worth of data storage and 24/7 monitoring; however, if something does happen to go wrong (such as theft or damage), then alert notifications will automatically send details of any event straight to your smartphone. 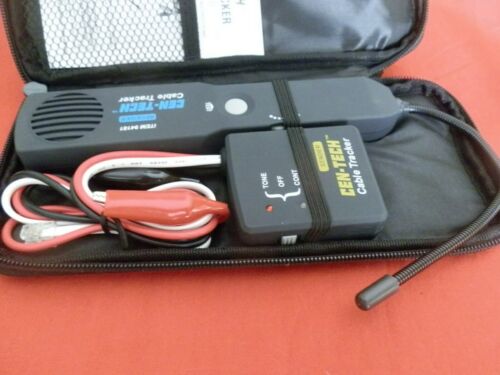 The cost of a cable tracker is another common point of debate for customers, with many reviews commenting on how expensive it can be compared to other available options like noyafa cable tracking devices and dog trackers. The smallest model from Cen-Tech costs around $70, whereas you can pick up a Noyafa tracker for just over $20 on Amazon and smaller devices are also available.


The benefit to buying one of these other models is obvious – they’re significantly cheaper than using a dedicated device, but that means you may have to sacrifice some features in order to get that lower price tag, especially if you want your tracker not only to help you find cables but also to deter thieves from stealing them in the first place.


When comparing Noyafa and Cen-Tech side by side, it becomes clear why so many users prefer one over the other. First off, let’s talk about pricing – while Noyafa comes in at a much more affordable rate, Noyafa products offer a lot of value for their respective prices.


The big difference between these two products is that Noyafa uses Bluetooth technology to connect with your phone (as well as GPS), whereas Cen-Tech uses radio frequencies instead.


You can also find many replacement accessories from different brands in online stores such as Amazon at reasonable prices, but there are no parts available for the Noyfa tracker. Overall, it’s hard to say which one is better because they both have their pros and cons; however, they do offer very different things despite having some features in common.


One other thing to know is that it is also pricier than other comparable products and that's why Noyafa Cable Tracker NF-826 has more features with a lower price tag and build quality of similar quality for a far lower price.


The reality is different so you will have to decide which product you want to use on your cable. What makes Cen-Tech Cable Tracker 9418 stand out from its competition is that it also uses microchip technology to stop cable theft and tampering as well as using multiple sensors and an alarm system to detect breaks in cables if any should occur.


Of all the possible brands of cable testers on the market, we can confidently say that Noyafa is the most functional and affordable option. It may cost a little more than some other popular brand names do but it is worth every single penny because it has such high-quality results. Once you try this tester, chances are you'll never go back to using another one again.